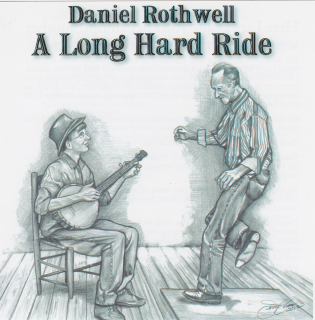 A Long Hard Ride
This album showcases Daniel Rothwell's versatility. Daniel is backed by a
stellar cast of musicians including Jesse McReynolds, Steve Thomas, Marlin Rood,
Travis Wetzel, Jackie Case, and Johnny Warren. Six-time National Old-Time
Buckdancing Champion Thomas Maupin's dancing is featured on this album just like
a lead instrument. Maupin proves that he is a master of his craft. The tunes on
this album cover a wide range. The album begins strictly Old-Time and
transitions from squaredance tunes to mountain ballads to early Country and
Bluegrass until finally ending with a Southern Rock electric guitar piece that
is turned into a showcase of clawhammer banjo playing and buckdancing. This
album also features Daniel Rothwell and his father singing a duet. Daniel
Rothwell pays respect to the Old-Time string bands that influenced him as a boy,
but he also ventures forth into new territory by creating new arrangements for
some of the old tunes.

If you like Old-Time banjo playing, check out this album.Â 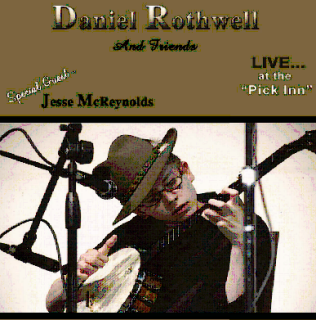 LIVE at the Pick Inn with Special Guest Jesse McReynolds
This CD was recorded live.
Daniel Rothwell got together to jamÂ with some friends one afternoon at theÂ Pick Inn in Gallatin, Tennessee and recorded ten songs. Â Bluegrass great Jesse McReynolds of the legendary Jim & Jesse joins Daniel as a special guest. Â Other musicians on thisÂ CDÂ includeÂ Daniel'sÂ dad Danny Rothwell and Larry CarneyÂ onÂ  acoustic guitar, and Lyle Cook on upright bass. Also featured is Daniel's grandaddy, six-time National Champion Old-Time Buckdancer Thomas "Magic" Maupin. This recording contains a large amount ofÂ Daniel's stage tunes as well as Daniel and Jesse singing together and a special tribute to Jesse. Â Due to the CD being recorded live instead of in a recording studio, theÂ CD does not have a"Slick Nashville Sound".

If you enjoy Daniel Rothwell's show, this album is sure to please.
$
15.00