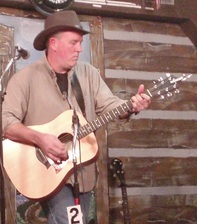 Danny has been playing the guitar since the early 70’s. His early
influences were James Taylor, Dan Fogelberg, Harry Chapin, John Denver, and Jim Croce.
Danny’s musical endeavors have been put on hold while he has been raising
a family and working at Nissan Motor Manufacturing in Smyrna TN.
Danny’s second breath at performing started when he
began backing his banjoist son Daniel Rothwell.
At one time Danny’s main style of guitar playing was in line with the subtle
finger-styles played by the popular artists of his younger days. Nowadays he
plays mostly rhythm and occasionally lends his vocals to a few of the bands songs.